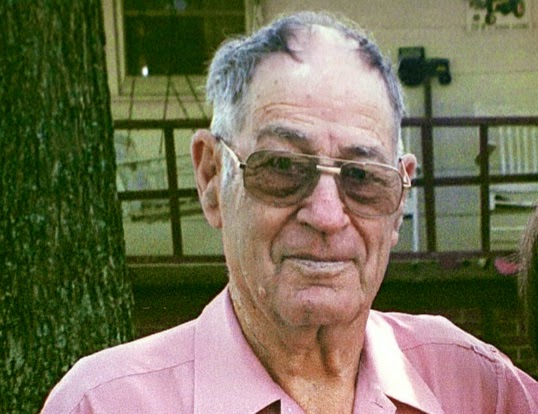 Below is the obituary that they family asked me to compose for my wife's grandfather, who died early this morning.

Eugene Dewitt (Gene) Brady of Nebo died Tuesday, June 3, 2014, at the age of 98. He actively worked on his farm until just a short time before his death. That he died peacefully in the hospital from pneumonia is one of the great anticlimaxes of history, since throughout his life he was never hospitalized by illness but was a frequent and infamous visitor to local emergency rooms due to his many adventurous and death-defying mishaps and injuries.

Gene was born to James Thomas Brady and May Preissinger on February 16, 1916, on the same farm at which he has resided to this day. His father died in 1933, leaving behind nine children with his wife, who herself died in 1941. In 1935 Gene joined the Civilian Conservation Corps. He served the CCC in Missouri, Nevada, and Oregon. After he left the CCC, he resided briefly in Anaheim, California. While working there in a cannery he met Lillie Ada Matthews of Heber Springs, Arkansas, whom he married on January 14, 1942.

The world was at war, and Gene joined the United States Army on September 1, 1942. He served in the Pacific theater of the war as a Radar Tech Sergeant with the Deadly 166th AAA Gun Battalion until his discharge on December 17, 1945. His battalion served in Australia, New Guinea, Leyte, Palawan, Mindoro, Mindanao, and other locations throughout the Southwest Pacific.

After the war, Gene returned to the farm in Laclede County with Lillie to raise their two children, Dale Eugene Brady (1943) and Marsha Ann Brady Prock (1948). In addition to his farming activities, he founded and operated the Brady Wood Treating Company for several years. Gregarious and generous, he became an integral part of his rural community. He voluntarily maintained private roads and county roads in the area, annually gave dictionaries to children in the Plato Elementary School, and served as a good neighbor.

Gene was among the longest-tenured members of the Cedar Bluff Baptist Church, serving there as a deacon. The church sanctuary sits on land that adjoins and once belonged to the Brady farm. He was ever faithful to the church in attendance, service, giving, and leadership. He and Lillie were earnest students of the Bible and devout practitioners of their faith.

Gene’s family and friends remember him as a playful and mischievous character with many idiosyncrasies—most of them delightful. He believed that cattle ought to remain in a pasture out of some moral obligation to “honor [his] fence,” whether the fence needed maintenance or not. He preferred over the use working dogs or agricultural implements to herd cattle by threatening them with his Buick. He never met a broken John Deere part for which he didn’t think that he could manufacture for himself a superior replacement. Our hearts are emptier today, but our highways are safer.

Funeral services will be Thursday, June 5, at the Cedar Bluff Baptist Church, with interment to follow at the Cedar Bluff Cemetery. Rev. Bill Jetton, Rev. Matthew Brady, and Dr. Bart Barber will preside. Viewing will be Wednesday evening, June 4, at Shadel’s Colonial Chapel.