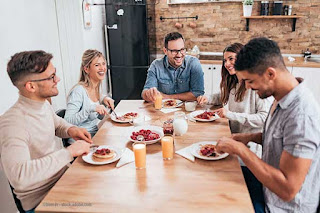 In June, Wired magazine published an article by Laurie Penny entitled "Live Wrong and Prosper: COVID-19 and the Future of Families." I thought that the article offered a fascinating insight into ways that changes in American family structure have made this pandemic different from the Spanish Flu epidemic a century ago.
Penny's article is a follow-up and expansion upon a Los Angeles Times article entitled "Coronavirus Quarantine Buddies Try to Lessen Isolation," a front-page article that featured a picture of Penny and her "pod"—what she calls the collection of "people [she was] neither related to nor sleeping with" with whom she was cohabitating and quarantining during the COVID-19 pandemic.
Penny argues that such an arrangement—a "found family"—has come of age and is the optimal arrangement for herself and for her generation. Her ancestors might disapprove and say that there is something wrong with anyone who would choose this sort of family arrangement over something more traditional, but in Penny's estimation, this is the only sort of arrangement in which she has any hope of finding relational fulfillment.

Julie Penny's favored alternative to the unrealistic ideal of a traditional family is the "found family" or the "forged family." Her preferred defintion is borrowed from Kurt Vonnegut—family is "whoever is around to be loved." In her interview with the Times, Penny preferred to call it a "pod." There's no procreative bond here. There's no sexual bond here. Procreation is not acknowledged as an aspiration anyone would have in these articles, and although there's plenty of room for sex, this kind of sex doesn't create or require anything resembling a "bond." There are some people who happen to be, at this particular moment, in your vicinity. You love them and hope they love you back. That's family. No ongoing commitment expected or given.
Penny's personal narrative gives very little reason to conclude that this way is to be chosen because it is better. Loneliness is all around this essay, barely held at bay by temporary measures, but never farther away than a multi-page letter from the roommates who are booting you out of the house.
Yesterday I participated in an hour-long Zoom call with college roommates in celebration of a roommate's fiftienth birthday. It was a lot of fun. We told a lot of stories. If God is merciful to me, none of you will ever hear any of them. I love those guys. It was a blessing to see how God has blessed and used them down through the years. But ultimately (and I think each of those roommates would write exactly this), what came into our lives when my wife and I married is something so much deeper and more enduring as to make two years in the Baylor Plaza II Apartments spent with good friends an appendix tucked away into the back of the story of our lives. Tracy has shaped who I am. We have struggled together, cried together, served together, and aged together. There are bonds that have been forged, and that's a good thing. Loneliness will someday come by way of illness or death, but otherwise, there is no loneliness so long as there is Tracy. Roommates (nor lovers) just can't provide what a spouse does.
But I didn't sit down and write this article just to trash Penny's article. Why invest in writing a blog article just to say that I disagreed with Julie Penny? Thoughtless curmudgeoning is why God invented Twitter.
I've written this article because Penny's essay offers an unintentional critique of Evangelical Christianity that we need to consider. The idea of the "found family," though it may sound to us unhealthy and bizarre in the California-est way possible, is actually a Christian concept, fundamental to our faith, and yet largely beyond our grasp.


Somewhere Between Oneida and Palmyra