Guess Where I Went to Church Today 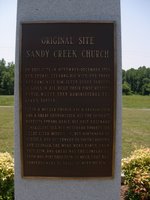 So we strolled in and discovered that we had arrived on business meeting Sunday. Today was the day of their big vote on plans for a new building. It seems that SCBC can no longer hold all of its attendees. The church's steady growth over the past few years has paved the way for a new facility. The church voted 85%-15% to go forward. Sandy Creek Baptist Church not only has a past; it has a future.

I think I know why. The pastor was obviously elated over the vote, but he spent more time extending genuine pastoral care and counsel to the 15% than anything else. This pastor gave genuine pastoral leadership, yet did so without abandoning or demonizing those who might have a difference of opinion. The Sunday School lesson and the sermon were sound, biblical, solid fare upon which Christians can grow. The pastor is a stable influence, a compassionate man without being mercurial or flashy, and a man committed to truth and exposition. The people were very friendly, genuinely welcoming to our presence and familial toward one another. The facility buzzed with excitement today—obviously somewhat about the vote, but more about the church. They know where they are going and they are thrilled about it.

The foundation at Sandy Creek Baptist Church is not some faddish human philosophy from Willow Creek or Saddleback. These people have been around too long to jump onto every bandwagon that rolls by. It is really quite simple: They've been around as a church long enough to know that God is their foundaiton and can get them through anything. They're strikingly unaware of their historical prominence. In their minds, they are simply a country Baptist church that God has kept around for a long time. There are no big egos at SCBC.

Sandy Creek Baptist Church is success, as far as Southern Baptists go. Our convention rises and falls as churches like this rise and fall. We never have been, are not today, and never will be a convention of megachurches. The fact of the matter is this: Being Baptist doesn't work all that well with being a megachurch. You can do it, but it presents all kinds of special challenges to your Baptistness. Even today, the majority of our churches are small. Most Southern Baptists attend a small, simple church. You wouldn't know it from the program of the SBC Annual Meeting. That's fine with me...the program ought to feature people who have distinguished themselves. But it does worry me that the emphasis upon megachurches may cause us to lose sight of what we really are: a convention of small churches. The pastor at SCBC may have a lot more to teach us about Southern Baptist Success than Ronnie Floyd, Frank Page, or even my candidate.

Tonight I have the option of going down to the Greensboro Colliseum to listen to Saddleback Rick. I think I'm going to drive back into the country instead.
Posted by Bart Barber at 2:45 PM