If You Should Go Looking for Adoniram Judson

Adoniram Judson died at sea in 1850. His body was buried at sea, but a memorial to Judson lies on Burial Hill, Plymouth, MA. Unfortunately, finding a particular grave on Burial Hill is not the simplest thing to do. If you should ever decide to do so, I want you to have an easier time of it than I had. Burial Hill lies immediately behind the Plymouth Unitarian-Universalist meeting house (I'll not employ the 'c' word here). Just to the right of the building is a steep staircase with iron rails on either side by which you may ascend Burial Hill. At some point nearly atop the hill, the railings cease and the path diverges. At that point, Judson's memorial lies just in front of you just a few feet away, enclosed by a white wooden fence. Here's how it looks from that vantage point: 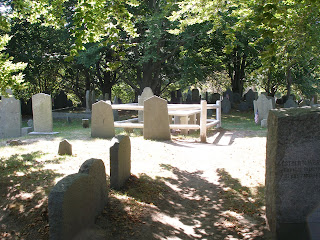 Judson, of course, is the great missionary to Burma who serves as such a wonderful example to us all. Judson began his missionary service as a Congregationalist (that is, as a pedobaptist). While sailing around the world to his post, Judson's independent study of the New Testament convinced him that Christ instituted believer's baptism, not infant sprinkling. Upon arrival in India, Judson sought believer's baptism. Judson's change of theology put him in a peculiar position. Here he was, planning to live on Congregationalist support, yet newly possessed of Baptist convictions. The Congregationalists did not wish to fund Judson as a Baptist missionary. Judson neither threw a fit claiming that his rights had been violated nor sued anyone for support. He trusted in God to meet his needs, and God raised up support among American Baptists, vindicating Judson's integrity. The legacy of Adoniram Judson still lives among the Karen people and in the existence of such entities as the Southern Baptist Convention, since Judson's efforts became the nucleus around which Baptists in America first organized for missions. Hats off to Adoniram Judson. Thank you, dear brother, for your faithfulness to the Lord. See you soon.
Posted by Bart Barber at 8:46 PM

Good story Professor Bart! I would have left the "c" word out also. Take a bunch of pictures so we can see some of these historical spots that our modern Baptist heritage continued and flourished.

great story. great lesson. may all southern baptist's learn it.

Maybe you can swing back through South Carolina and get a picture of Luther Rice's burial place. Or you could just click this link and save about a thousand miles of driving. :-)

Perhaps I will be seen as mean spirited for what I am about to say, but I think our first American Baptist Missionaries set a great example of integrity that ought to be followed today. When missionaries find that they are out of step doctrinally with the churches providing their support, those missionaries ought to have the integrity to resign and seek the support of those churches who agree with them.

Integrity! It works! I appreciate your emphasis on Baptist history. None of us should forget that we owe the existence of the International Mission Board to the formation of the Southern Baptist Convention, which came out of the Triennial Convention. The Triennial Convention in turn was formed in large part due to the efforts of Luther Rice. And, why exactly was Rice in America and not back in Burma with the Judsons? After Rice and the Judsons had the integrity to inform their Congregationalist supporters of their differences, they were stranded (in human terms) in Burma without any support. Baptists needed to be organized to support BAPTIST missions and our cooperative efforts were born. So all those thousands of missionaries who have gone out under the support of the Foreign Mission Board/International Mission Board are not the result of watering down doctrinal differences about Baptism (or tongues, etc.) in any effort to be more inclusive of more missionaries. On the contrary, it all was birthed because missionaries and churches had the integrity to stand firm on Biblical Doctrine. I believe those who wish to water down that doctrine, if allowed to do so, will be the ones to have the opposite effect. They will be the ones burying our cooperative missions efforts, and someday, someone will visit those buildings in Richmond, Virginia and post a picture on a blog, of the once great, but now dead International Mission Board. May it never be!

The "C" word? do you mean the fact that he was a calvinist?

He also went 6 years in Burma without a convert. Most pastors stay in their "mission field" for less than 4 years in the sbc.

Some may "mean spirited" but I say AMEN!

In fact, there is a growing Karen population in Fort Worth and Lewisville. Many of them have had to flee Burma and have spent years in refugee camps until being resettled in another country. One of the first things one of them asked me yesterday was "Are you a Christian?" The legacy of Adoniram Judson's faithfulness to the Lord and more importantly God's work in the Karen people's hearts still lingers today.

John in Fort Worth

Was there scripture in this post and I missed it? Was there in other posts? I guess I missed it in all the history.

in your comment above i saw no scripture. where's the scripture? i guess i missed it in all the questions and possible insinuations that it nullifies what bart has shared about some missionaries who werent in the bible.

My family went to Plymouth Plantation about 25 years ago. One of my family was trying to make conversation with one of the "colonists" and asked about the church up the hill. The reply was quick and caustic (apparently a characteristic of that well researched colonist). The building on the hill was a meeting house and the people were the church. So Bart has turned out to be historically and currently correct--for other reasons than he expected.

A place that you should visit if you are in Providence, RI, (about 100 miles away from Plymouth) is Roger Williams' church. It is located at the foot of the hill that Brown University is built on. It was built in 1776 (dedicated anyhow) and holds about 1500 people in a huge frame building. It was built for the worship of God and for having commencement services for Brown University. The Sunday we were there it held about 50.

We went there. I have photos. There's a post coming.

You know that Wade has many posts concerning historical figures and events that he uses to make a point. If you are going to call into question Bart, do the same with your pastor.

I would suggest reading Les' posts he wrote the last 2 days. Now that is Biblical. It would also settle the question being discussed. History isn't. Not in this case. BTW Wade uses both. History and scripture.

I must confess, I have no idea what you are talking about. This post is not an exposition of a text of scripture, but neither are all of yours, Wade's, Les's, or anybody else's in this Baptist blog-world.

What, precisely, are you trying to imply? That I do not know the Bible? That I have no biblical basis for my theology. Don't be shy, Debbie—if you have something to say, say it.

I will be glad to give biblical foundations for any point of doctrine, but first you're going to need to tell me the point at which you need biblical education. Do I need to provide the biblical basis for believer's baptism? Christian unity? Church discipline? Not suing one another? Missionary activity? The life of Adoniram Judson intersects with about a thousand points of theology. Give me a little more direction, and I'll gladly oblige you.