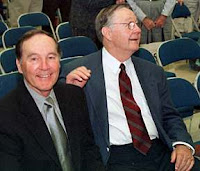 Among FBC Farmersville's favorite sons is BO Baker. Today, at the age of 87, BO Baker walks with the Lord in glory.

BO and his brother Dick were the sons of "Bunk" Baker, a pillar of FBC Farmersville throughout most of the twentieth century, a bold witness for Jesus Christ to the residents of Farmersville, and a prominent local businessman. I still have members here who will tell you that they came to this church because Bunk Baker came to their doorstep within their first 48 hours of having arrived in Farmersville to invite them to church here. Bunk Baker himself had been saved well into adulthood due to the witness of Matthew Mueller, the only pastor of FBC Farmersville to remain in this pulpit longer than I now have (he stayed 14 years; I've been here 11).

From Farmersville BO Baker went to Baylor University (in a round-about sort of way). He came to direct the singing at the BSU's midweek "Baylor Religious Hour." In that role BO Baker first became involved in the stirrings of the Holy Spirit that turned into the Youth Revival Movement. Looking back, Baker reflected:

Out of the sparks of campus revival spread flames of interest within the student world. . . . The result was the meaningful and historically important Youth Revival Movement which claimed the high point on the spear as revival spread beyond the faculty and student body at Baylor and Waco, producing a fire fall at other university campuses across the [South]. The Youth Revival Movement was truly a remarkable work of God. Its only explanation was divine intervention.

Indeed, the Baylor revivals inaugurated one of the most significant spiritual awakenings among Southern Baptists in the twentieth century. Along with Buckner Fanning, Howard Butt, and other significant leaders, BO and Dick Baker played an integral role.

BO and Dick sang together and played trumpet duets. The two served together on the staff of Birchman Avenue Baptist Church in Fort Worth. BO eventually pastored the Plymouth Park Baptist Church in Irving, TX, for some 25 years, while his brother Dick served as the Minister of Music at Prestonwood Baptist Church for 15 years. Throughout their lives, even when they were serving at different churches, they regularly led revivals together. One of their last (perhaps THE last?) trumpet duets that they played was before a crowd of 40-or-so senior adults here in our gymnasium. I was delighted to be present.

BO leaves behind a legacy of poems, sermons, and prose. My favorite entry is his (as far as I know) last book, entitled Until the Phone Stops Ringing. This very personal memoir, copiously adorned with photographs old and new, tells of the enduring connection between Farmersville, TX, and this emissary of our congregation who served the Lord so well and so widely. The title of the book comes from BO's repeated reply to those who inquired as to when he would retire: "We plan to retire when the phone stops ringing!"

A call came to BO Baker this morning that preempted all others. Right now he is with the Lord.

I write today to honor BO Baker. He and the movements of which he was a part WERE the 1950s so lampooned and castigated and demeaned and relegated to unimportance in the headlines today (and yet entirely unsurpassed). Allow me to say it: I think that BO Baker's work was important. I think the myriad souls saved under his preaching came by the action of the Holy Spirit who chose to bless what BO was doing. I think that my ministry could benefit from being a little bit more like Bunk and BO and Dick. I think if we wish to see the kind of Great Commission Awakening that we say we want to see, we might do well to stop talking for a minute and listen to the BO Bakers out there in our convention, while we still can.

Brother Bo Baker was Pastor at Plymouth Park Baptist Church during the time I was a teenager and young adult. He was the Evangelist who came along with his brother led a Revival at Plymouth Park Baptist Church in 1967 when my Mom went down to move her letter to the church and my Brother who was 9, our Dad,and myself went down and accepted Christ. My youngest Brother who was 4 at the time went down two years later and accepted Christ. We thank Brother Baker for bringing our family together into the Church and Family of God. Brother Bo is not only having a great reunion this day with his family but also my brother and dad are there along with so many others from Plymouth Park who knew him well.He was a wonderful person and one that you could go to when your heart was troubled and he would tell you to take it to God and pray with you. Because of him my Dad became a Christian even though he had always told us he was born Catholic and would die Catholic. The Revival in 1967 totally changed our family for the better and my dad served for many years as a Deacon until he himself became ill. Thank you Brother Bo for your service to us. I say thank you to his children as well for sharing him with us. I know you will miss him but he is no longer in pain and is having a joyous reunion.

Yes, Debra, I'm very thankful that he is no longer ill. The last time I went to see him, he wasn't so ill he couldn't even visit. Praise the Lord that the ultimate healing is his now.

We have learned that, subsequent to tomorrow's private graveside service, there will be a memorial service on Saturday, February 20, 2:00 PM, at Plymouth Park Baptist Church, Irving, TX.

Dr. Barber. I was a product of the youth revival spread by the Bakers, etc. Though saved at 9, I was called to preach and greatly stirred through the ripples of their work. "His way, my way" is one of their songs that stirred my young soul to total commitment to Christ. The preaching of Bill Glass and Howard Butt also impacted me as a college student. Indeed the 50s wasn't all bad. Thank you for your moving tribute to Bo Baker. Jerry Vines

Dr. Vines, thank you so much for sharing that testimony. We never know how many lives will be touched when we yield ourselves under the hand of God!

I am always glad to share my testimony and since it involves my entire family I think it needs to be shared so that other families that are hurting might come to know Christ as we did. We just need more Preachers like Brother Bo. I feel sad that there is no revival in our land right now. Who will take the place of all the great Preachers so that we can bring more people into God's Family. I will miss Brother Bo's smile and his laughter. While he was our Pastor I gave my life to be a missionary at the age of 17. I went to college but never finished but was used of God at my home in our church and another church we later attended. I was a missionary to the families of the church in caring for their children and ministering to them.

I served with BO on staff at PPBC for 8 years. He has always been an inspiration to me and my family. I haven't seen him in person in the past 10 +/- years, but I will miss him.

To God be the glory!
David Strawn

I served on a board with him many years ago. The mention of his name brings back memories of others who have gone to be with the Lord. Those were good days. Yet, I know Bo would not trade any of his present for all of his past.

BO Baker is one of the familiar names I’ve heard and been impressed with through the years. I appreciate your comments about him, and the 1950s. We have many heroes of the faith that served God in great ways during the 1950s. Heroes that are passing from the scene. Praise God for their lives and ministries. While we have the chance, we should honor them for what they’ve done for the cause of Christ. We might even learn from them as well.
David R. Brumbelow

The last time I was down in Ft. Worth I went to the Lifeway store adjacent to Southwestern Seminary. That particular Lifeway store is huge compared to the one here in Oklahoma City.

I got a book down there that is the biography of our former pastor here, Dr. Jimmy Draper.

In the book, Dr. Draper mentions various revivals that he preached in when he was in his late teens and early 20s down there in Texas. I wonder if he was also part of the same "youth revival movement".

I went today to the Memorial Service for Brother Bo Baker. It was a very uplifting and wonderful service. I enjoyed seeing old friends from my youth and enjoyed my visit with Lisa and David. The message that the ministers gave and the songs that were sung were beautiful. I will miss Brother Bo and know that he, my dad and brother are in Heaven joking with one another like they did when they were all here. Going back to Plymouth Park Baptist Church today brought back many happy memories for my mom and I. Though the Church Building has changed the love and atmosphere of the church is still there.

I was there, too. It was indeed an uplifting service. Too bad we didn't know how to recognize one another!

Yes it is ashamed we could not recognize each other while there. I was so busy visiting with people I had not seen since the 80's. It was a wonderful homecoming for many of us, but nothing like the homecoming we will have some day.

My mother was born and raised in Farmersville and knew the Baker family, went to school with BO and worked in dad Bunk's candy kitchen. I think just about everyone who grew up in Farmersville in that era worked there at one time or another. I would so like to read the book you mentioned that BO wrote, "Until the Phone Stops Ringing," but I can't find it anywhere. Any leads to the book would be greatly appreciated.

The book was self-published. I got one because BO gave it to me. My best advice to you would be that you write Dick care of Prestonwood Baptist Church and ask him if you can purchase a copy.

The other possibility: I think that Dyer's Drug Store in Farmersville had a limited supply of these at one time. You might check with Frances over at Dyer's and see whether they will sell you a copy.

And if you're ever back at the family home in Farmersville, stay over a Sunday and come see us!

Bo and Dick Baker co-wrote a beautiful song, "The Carpenter," many years ago. I've sung it for several years, but don't have the printed music. If someone knows of a source, I would love to have it to share with someone who asked. Thanks.
Cliff Lancaster
cliffandsue@suddenlink.net