Beginning to Serve: The Greatest Promotion 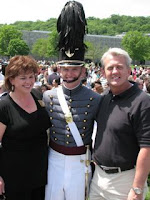 Today I depart for Northeast Arkansas and my niece's sixteenth birthday celebration. This will also be my last opportunity to visit my nephew, 2nd Lieut. Alex B. Smith, before he reports for duty in Iraq. The photograph is from Alex's graduation ceremonies at the United States Military Academy at West Point.

I went to visit Alex on post a year and a half ago. The commuter rail line runs today on the opposite bank of the Hudson from West Point, but from the Garrison station you can look across the river and see the old train platform. As I sat outside and sipped from a bottle of water, idly gazing across the river while awaiting the train, I couldn't help but think of all of the boys who had disembarked at that very platform down through the years. The Pattons and Lees and Eisenhowers went on from there to greatness. Many others, no doubt, served their country just as faithfully, albeit without the same level of recognition. Many paid the ultimate price of service.

Some call graduation from West Point "the greatest demotion of your life." West Point students regularly entertain grandees and receive VIP treatment on tours of Washington, New York, etc. Then they graduate to become lowly 2nd Lieutenants. Or so some people say.

In my opinion, it is no demotion to move into a place of service. My nephew will soon be leading men, perhaps in combat. It will be his responsibility to keep men safe, to help men grow, and otherwise to serve them while leading them. I'll repeat what I've said before: I'm proud of him. He could have gone anywhere, but he chose military service in the post-9-11 era. He and his comrades in our all-volunteer army are heroes—every last one of them—and I'm very excited about spending a few hours with him before he goes.

If Jim is with you make certain he has his sword. I am sure he would enjoy a sword fight with your nephew, as it was probably you that started the sword fights in your family. :>)

I also had a nephew that served in Iraq. He was an EM and served faithfully. He is still in the AR and can possibly be called back to active duty. Our prayers are with your nephew. Enjoy your time together.

I hope and pray that you enjoy your time with your family. I will also keep your nephew in prayer (as we pray for all of our troops). I have two sons serving in the Air Force, and another sone who will be entering the Army by the end of this month. I am very proud of all of them.

I will add his name to those of whom I pray for who keep watch while I sleep in a land of freedom.